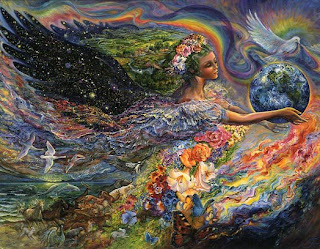 This page explores both the problems and offers SOULutions

For the ones among us that have remained blocked in the crystallized age old belief that killing for living and consuming animal based foods is TRADITIONAL…please remember and bare in heart mind that the ONLY CONSTANT in an EVEREXPANDING, EVEREVOLVING Universe… is CHANGE
No current lifeform has been born as is and will not remain the same
EVERYthing and EVERYone is on a constant EVOLUTIONARY PATH
ALL lifeforms that were unable to adapt to CHANGE, have perished by SELF destruction
This applies to SPIRITUAL change evolution as well as physical
If our “traditions” are no longer compatible to where our spiritual path should be, in relation and resonance to the rest of Creation, if our traditions in fact not only slow down our spiritual evolution but they are sabotaging it, it is time to walk away from them and Recreate NEW traditions which will be in complete resonance and harmony with the spiritual evolution of ALL life…and this INCLUDES our FOOD traditions.
IF HUNTING, ANIMAL SLAUGHTERING, CONSUMING and FISHING were ever “traditions”, then, that must also change into a NEW traditions of PLANTING and EATING REAL FOOD (the ORIGINAL TRADITION), such as grains, fruits, legumes, vegetables, nuts and seeds while becoming the TRUE EARTH GUARDIANS (GAIANS) that was initially planned and agreed on, taking good CARE of ALL life and the planet: air, water and land instead of hunting and destroying it.

There is absolutely NO GLORY and no reason to feel MANLY when wearing disguising outfits and carrying dangerous, deadly guns, while COWARDLY hiding behind trees and bushes and preying on gentle, free, unsuspecting, innocent, pure SENTIENT BEINGS. Such a killed being can in no way become a TROPHY of any sort. And such barbaric, cruel practice can in no way be called SPORT, for ANY SPORT requires WILLING participants with EQUAL FAIR positions in the game.
The ONLY time when hunters MAY have been able to brag about hunting would be to walk in a forest empty handed and attempt to “catch” an animal while participating to a FAIR, ONE ON ONE SPORT act.

There is absolutely NO GLORY and no reason to feel MANLY when using BAIT and DEADLY SMARTLY created tools of death such as FISHING HOOKS, TACKLE and RODS and PREY on unsuspecting fish, and forcefully dragging them while under painful and torturous throes, out of their natural environment, then SHOWING OFF your “fishing skills”…
The ONLY time when fisherman MAY have been able to brag about fishing would be to jump in water empty handed and attempt to “catch” a fish with BARE HANDS while participating to a FAIR, ONE ON ONE SPORT act.

The exceptions of hunting and fishing for FOOD, just enough to consume as needed and nothing more is in no way related to the act of HUNTING or FISHING for the PLEASURE or “GLORY” of it.
The "exceptions" refer to those extreme cold areas such as North Pole where the climate is too difficult to grow REAL FOOD such as grains, fruits, legumes, vegetables, nuts and seeds...

Many identify themselves with and through their ACTIONS


Fishing and hunting is what you DO, not who you ARE.
What you DO is not who you ESSENTIALLY ARE.
Your TEMPORARY ACTIONS and ORIENTATION do not define who you are in ESSENCE.
But REPEATED LONG ENOUGH, can definitely shape WHO you’ll BECOME.
Remember: You are neither a FISHERMAN nor a HUNTER. You are SPIRIT incarnate.
You are PART TIME Human and PERMANENT FULL TIME SPIRIT.
And so it is with every other LIFE FORM created by CREATOR of ALL, ANIMALS INCLUDED.
We are ALL SPIRITUAL BEINGS, having SOULS and EXPERIENCING life in INFINITE FORMS: MINERALS, PLANTS, ANIMALS, HUMANS and BEYOND.

If the SAME SOUL would infinitely incarnate (project in 3D bodies)in SAME LIFE FORM, time and time and time again, over and over and over, SPIRITUAL EVOLUTION would not be possible. There’s only THIS much you can learn as ANY LIFE FORM. Just like PHYSICAL evolution, infinite repetition of the SAME and resistance to ADAPT and CHANGE inevitably transforms in self extinction, with BOTH physical and SPIRITUAL evolution obsolete.  Thus, spiritual evolution, just like physical evolution not only is NATURAL and NECESSARY but ultimately unavoidable.

It is fascinating to observe how HUNTERS are playing ILLUMINATI to WILD LIFE. Hunters have decided to PLAY GOD to NATURE and to WIPE OUT living beings from their natural habitat, reasoning that they are HELPING THE NATURE REJUVENATE ITSELF by CLEANING UP EXCESS OF LIFE. Immediately we can connect the very same concept with how the illuminati have also DECIDED TO PLAY GOD and “help” the “overpopulated” Mother Earth RID HERSELF of her children in human forms by depopulation means.
Then, the same hunters go on becoming TRUTHERS and attempting to revolt against the very powers whom they so perfectly mirror in a not so perfect way.

Then, we are off to the PEACE activists who unaware participate to the WARS against our fellow EARTH OCCUPANTS.

And the ENVIRONMENTAL activists who through their eating habits participate to the Earth and other life forms destruction through their continuous support of industries who are NOT part of the environmental solutions but quite the opposite.

And to the spiritual workers who invest lots of precious energy into healing, meditating and praying for WORLD HEALING and ASCENDING while they continue, through their eating habits to ADD and RADIATE more of the SAME OLD destructive, negative, fear and horror energies infused into our Earth/human/animal energy field and WITHIN our physical bodies through THEIR eating habits which directly support the planetary genocide against fellow earth occupants and spiritual families in temporary animal forms.

Believing and ACTING that ANY other GOD created being is INFERIOR to us, temporary  HUMANS,  is the lowest form of insult to our Creator and the biggest karmic DISERVICE you can bring upon yourself.

We are all spiritual beings in an infinite LIFE FORMS expression of our INFINITE Creator in a continuous expansion and spiritual growth.  If our Creator has THOUGHT OUT ANY LIFE FORM and took so much effort to design and create this multitude of LIVING BEINGS, who are WE to decide WHO gets to LIVE and who gets no die? Interfering with the UNIVERSAL PLAN for each living beings is a major spiritual trespass with unavoidable, self created karmic consequences.

Knowingly or not, directly or indirectly. Doing it ourselves or paying others to carry out the killing on our behalf. The slaughter houses workers are on OUR payroll. The supermarkets sell the bodies of destroyed lives because there is DEMAND. Once the DEMAND ceases, so will the SUPPLY and the NEED for animals holocausts concentration camps.
SUPREMacism, ELITism, SPECIEsm, RACIsm, SEXism, how it all began
http://agnvegglobal.blogspot.com/2011/11/agn-veg-global-red-pill-how-it-all.html

Poem to the AWAKENing
http://agnvegglobal.blogspot.ca/2012/06/poem-to-awakening.html


Eating Meat and its effects on Spiritual Vibration Frequency
http://agnvegglobal.blogspot.com/2011/12/eating-meat-and-its-effects-on.html

How to make a smooth, natural transition to a vegan lifestyle
http://agnvegglobal.blogspot.com/2011/12/how-to-make-smooth-natural-transition.html

MEAT of the FUTURE is HERE
http://agnvegglobal.blogspot.ca/2012/05/meat-of-future-is-here_31.html 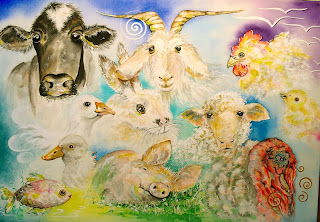