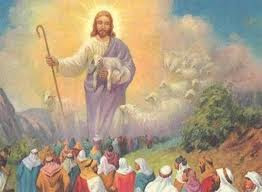 'Thou shalt not kill any living thing,' for life is given to all by God, and that which God has given, let not man taketh it away. ~Jesus, Gospel of the Holy Twelve

"Wherefore I say to all those who desire to be disciples, keep your hands from bloodshed and let no flesh meat enter your mouths, for the Lord is just and bountiful; who ordains that man shall live by the fruits and seeds of the earth alone."
Jesus, Gospel of the Nazirenes, Chapter 38, Verse 4

All beings tremble before violence. All fear death. All love life. See yourself in others. Then whom can you hurt? What harm can you do?” ~ Buddha

"For as long as men massacre animals, they will kill each other. Indeed, he who sows the seed of murder and pain cannot reap joy and love." Pythagoras, mathematician


"As long as there are slaughterhouses, there will be battlefields." -Leo Tolstoy

“We need never look for universal peace on this earth until men stop killing animals for food. The lust for blood has permeated the race thought and the destruction of life will continue to repeat its psychology, the world round, until men willingly observe the law in all phases of life, ‘Thou shalt not kill.’” – Charles Fillmore, “The Vegetarian,” May 1920

"I am not interested to know whether vivisection produces results that are profitable to the human race. The pain which it inflicts upon unconsenting animals is the basis of my enmity toward it, and it is to me sufficient justification of the enmity without looking further."
Mark Twain (1835-1910)

"Can you really ask for what reason Pythagoras had for abstaining from flesh? I, for my part, marvel at which man was possessed, who was the first to pollute his mouth with gore, and to allow his lips to touch the flesh of murdered beings."
Plutarch of Chaeronea (ca. 100 C.E.)

"But if you will contend that you were born to an inclination to such food as you have now a mind to eat, do you then yourself kill what you would eat. But do it yourself, without the help of a chopping-knife, mallet or axe, as wolves, bears, and lions do, who kill and eat at once. Rend an ox with thy teeth, worry a hog with thy mouth, tear a lamb or a hare in pieces, and fall on and eat it alive as they do."
Plutarch of Chaeronea (ca. 100 C.E.)

A man can live and be healthy without killing animals for food; therefore, if he eats meat, he participates in taking animal life for the sake of his appetite. And to act so is immoral."
Leo Tolstoy (1828-1910)

"Non-violence leads to the highest ethics which is the goal of all evolution. Until we stop harming all other living beings, we are all still savages."
Thomas Alva Edison, inventor

"Atrocities are no less atrocities when they occur in laboratories and are called 'medical research'."
George Bernard Shaw

"The greatness of a nation and its moral progress can be judged by the way its animals are treated." Mohandas K. Gandhi

"Animals are my friends. And I don't eat my friends."
George Bernard Shaw

It seems to me of great importance to teach children respect for life. Towards this end, experiments on living animals in classrooms should be stopped. To encourage cruelty in the name of science can only destroy the finer emotions of affection and sympathy, and breed an unfeeling callousness in the young towards suffering in all living creatures."
Eleanor Roosevelt, writer, diplomat, former First Lady (1884-1962)

"It ill becomes us to invoke in our daily prayers the blessings of God, the compassionate, if we in turn will not practice elementary compassion towards our fellow creatures."
Mohandas K. Gandhi


To become vegetarian is to step into the stream which leads to nirvana.
--Buddha

"Non-violence leads to the highest ethics, which is the goal of all evolution. Until we stop harming all other living beings, we are still savages."
-Thomas Edison

"You have just dined, and however scrupulously the slaughterhouse is concealed In the graceful distance of miles, there is complicity."
--Ralph Waldo Emerson