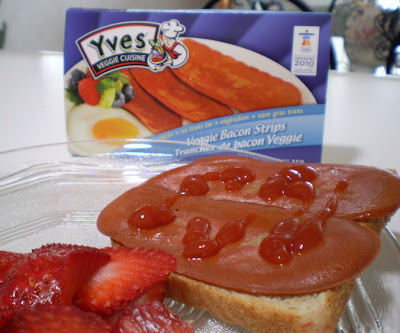 As a reformed Eastern European meat eater, deciding to go VEGAN for my lifelong undying love and devotion to animals and the planet was sometimes hard because there aren't better tasting CURED, SMOKED MEAT products in the world such as EASTERN EUROPEAN ones.

If I've ever missed something from my 40 years+ meat eating life, were those delicious SMOKED meats. But, due to my even BIGGER LOVE for animals and Creation, I have made a conscious decision to go vegetarian first, then, as by body and mind adjusted, went 50/50 RAW VEGAN, gradually increasing my RAW percentage as my body guided me.

And, JUST when I was getting warmed up to learn to cook DELICIOUS and HEALTHY VEGAN foods, lo and behold…the SURPRISE of VEGAN DELI.

I've tried quite a few kinds, as depicted in this album and with my very sharp Eastern European sense of food critique, ingrained from birth in each living breathing Eastern European, which prides from offering some of the most delicious foods to the world, I have discovered at least 3 AMAZING VEGAN replacements for the MEAT versions deli/smoked meats which will pass even the HARSHEST food critic with an Eastern European background and in fact, most, if not all bacon/deli lovers in the world. My TOP 3 favs are:

Try them on your own fav sandwich with some VEGAN MAYO, DAIYA CHEESE, dijon mustard, lettuce, cucumbers, chives, tomatoes
you're in for a huge surprise
GIVING UP MEAT has never become easier with such amazing products

For Eastern Europeans, try to make your CABBAGE ROLLS with VEGAN GROUND TOFU, TOFURKY AND VEGAN "BACON" instead of ground meat...keeping the same standard traditional ingredients such as onion, rice, salt, pepper, basil and tomato paste...YOU WON'T BELIEVE your taste buds...my still (transforming) omnivorous family was completely shocked to taste my VEGAN CABBAGE ROLLS this time of the year and they've also decided to make VEGAN cabbage rolls this year, since, based on THEIR feedback, THEY COULDN'T TELL THE DIFFERENCE :)

and check back for added links below

surely, the ongoing goal is to go 70% RAW VEGAN based on SUPERFOODS and 30% cooked vegan, for all times sake

but in the transitory, intermediate stage don't be shy to try and test such delicacies, for VEGAN LIFE can become much easier from a psychological standpoint, IF..ONLY IF...sometimes, your undying devotion, love, respect for CREATION and HEALTH CONCERNS are not enough of a motivating factor and you have down moments when social, family pressure makes it hard at times...which is a normal process...grieving our past eating habits is not uncommon even among the most die hard, well intended people who are making a WILLFUL, COMMITTED, CONSCIOUS DECISION to go vegan...

most of us are born and raised into a very DENSE MEAT consciousness environment with ALL family, special occasions, religious and national celebrations, gatherings, CAREFULLY, INTENTIONALLY orchestrated and imbued into our consciousnesses by the dark powers TO HAVE BEEN, in order to KEEP US INDEFINITELY CHAINED, ENSLAVED AND BONDED to the merry go round animal sacrifice/consumption cycle, which never benefited our physical and spiritual health but surely benefited the industries and the dark agenda for reasons too overwhelming to be accepted by even the most awaken ones.

Follow your heart and you too shall see through the lies and the fog, someday.
Feel free to browse this blog at leisure to discover a NEW, WONDERful world of HEALING, FREEDOM and TRUE PEACE for all BEINGS!