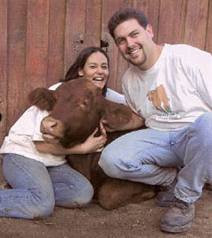 "The soul is the same in all living creatures, although the body of each is different. " --Hippocrates
http://www.think-differently-about-sheep.com/Sentience_in_farm_Animals.htm


"But for the sake of some little mouthful of flesh, we deprive a soul of the sun, and light, and of that proportion of life and time they had been born into the world to enjoy."
Plutarch of Chaeronea (ca. 100 C.E.)

"For as long as men massacre animals, they will kill each other. Indeed, he who sows the seed of murder and pain cannot reap joy and love." Pythagoras, mathematician
"Non-violence leads to the highest ethics which is the goal of all evolution. Until we stop harming all other living beings, we are all still savages."
Thomas Alva Edison, inventor
"If a man aspires towards a righteous life, his first act of abstinence is from injury to animals."
Albert Einstein

"Atrocities are no less atrocities when they occur in laboratories and are called 'medical research'."
George Bernard Shaw

"The greatness of a nation and its moral progress can be judged by the way its animals are treated."
Mohandas K. Gandhi

"If we are trespassing, then so were the American soldiers who broke down the gates of Hitler's death camps. If we are thieves, then so were the members of The Underground Railroad who freed the slaves from the South. And if we are vandals, then so were those who destroyed forever the gas chambers of Buchenwald and Auschwitz."
Animal Liberation Front

When I look at animals held captive by circuses, I think of slavery. Animals in circuses represent the domination and oppression we have fought against for so long. They wear the same chains and shackles."
Dick Gregory, comedian, civil rights activist, humanitarian, vegan

"Animals are my friends. And I don't eat my friends."
George Bernard Shaw

It seems to me of great importance to teach children respect for life. Towards this end, experiments on living animals in classrooms should be stopped. To encourage cruelty in the name of science can only destroy the finer emotions of affection and sympathy, and breed an unfeeling callousness in the young towards suffering in all living creatures."
Eleanor Roosevelt, writer, diplomat, former First Lady (1884-1962)

"It ill becomes us to invoke in our daily prayers the blessings of God, the compassionate, if we in turn will not practice elementary compassion towards our fellow creatures."
Mohandas K. Gandhi

Housing animals in more comfortable, larger cages is not enough. Whether we exploit animals to eat, to wear, to entertain us, or to learn, the truth of animal rights requires empty cages, not larger cages."
Tom Regan, Empty Cages
"Wherefore I say to all those who desire to be disciples, keep your hands from bloodshed and let no flesh meat enter your mouths, for the Lord is just and bountiful; who ordains that man shall live by the fruits and seeds of the earth alone."
Jesus, Gospel of the Nazirenes, Chapter 38, Verse 4

Kindness and compassion towards all living beings is a mark of a civilized society. Racism, economic deprival, dog fighting and cock fighting, bullfighting and rodeos are all cut from the same defective fabric: violence. Only when we have become nonviolent towards all life will we have learned to live well ourselves."
Cesar Chavez

"Until he extends the circle of compassion to all living things, man will not himself find peace."
Albert Schweitzer

"But if you will contend that you were born to an inclination to such food as you have now a mind to eat, do you then yourself kill what you would eat. But do it yourself, without the help of a chopping-knife, mallet or axe, as wolves, bears, and lions do, who kill and eat at once. Rend an ox with thy teeth, worry a hog with thy mouth, tear a lamb or a hare in pieces, and fall on and eat it alive as they do."
Plutarch of Chaeronea (ca. 100 C.E.)

"A man can live and be healthy without killing animals for food; therefore, if he eats meat, he participates in taking animal life for the sake of his appetite. And to act so is immoral."
Leo Tolstoy (1828-1910)

“This is dreadful! Not only the suffering and death of the animals, but that man suppresses in himself, unnecessarily, the highest spiritual capacity—that of sympathy and pity towards living creatures like himself—and by violating his own feelings becomes cruel.” Leo Tolstoy

"Can you really ask for what reason Pythagoras had for abstaining from flesh? I, for my part, marvel at which man was possessed, who was the first to pollute his mouth with gore, and to allow his lips to touch the flesh of murdered beings."
Plutarch of Chaeronea (ca. 100 C.E.)

"I am not interested to know whether vivisection produces results that are profitable to the human race. The pain which it inflicts upon unconsenting animals is the basis of my enmity toward it, and it is to me sufficient justification of the enmity without looking further."
Mark Twain (1835-1910)

"It is not an act of kindness to treat animals respectfully. It is an act of justice. It is not 'the sentimental interests' of moral agents that grounds our duties of justice to children, the retarded, the senile, or other moral patients, including animals. It is respect for their inherent value. The myth of the privileged moral status of moral agents has no clothes."
Tom Regan, The Case for Animal Rights

"If a man aspires towards a righteous life, his first act of abstinence is from injury to animals."
Albert Einstein
The great philosopher Schopenhauer, in criticizing how some Christians treat animals, wrote, “Shame on such a morality that fails to recognize the eternal essence that exists in every living thing, and shines forth with inscrutable significance from all eyes that see the sun.” All of us are celebrations of infinite mysterious Spirit, deserving of honor and respect.

“It should not be believed that all beings exist for the sake of the existence of man. On the contrary, all the other beings too have been intended for their own sakes and not for the sake of anything else.”- Maimonides

Some people are still going to want to eat meat.. we do agree though that vegetarianism is a healthier diet. --David Stroud of the American Meat Institute ...
To become vegetarian is to step into the stream which leads to nirvana.
--Buddha
"Non-violence leads to the highest ethics, which is the goal of all evolution. Until we stop harming all other living beings, we are still savages."
-Thomas Edison

"You have just dined, and however scrupulously the slaughterhouse is concealed In the graceful distance of miles, there is complicity."
--Ralph Waldo Emerson

"We stopped eating meat many years ago. During the course of a Sunday lunch, we happened to look out of the kitchen window at our young lambs playing happily in the fields. Glancing down at our plates, we suddenly realized we were eating the leg of an animal who had until recently been playing in a field herself. We looked at each other and said "Wait a minute, we love these sheep - they're such gentle creatures. So why are we eating them?" It was the last time we ever did."
-Paul and Linda McCartney
"If slaughterhouses had glass walls, everyone would be a vegetarian."
-Paul and Linda McCartney

"I have learned from an early age to abjure the use of meat, and the time will come when men such as I will look upon the murder of animals as they now look upon the murder of men."
-Leonardo Da Vinci
"As custodians of the planet, it is our responsibility to deal with all species with kindness, love and compassion. That these animals suffer through human cruelty is beyond understanding. Please help to stop the madness." -Richard Gere

"People get offended by animal rights campaigns. It’s ludicrous. It’s not as bad as mass animal death in a factory."
--Richard Gere

"If you could see or feel the suffering, you wouldn't think twice. Give back life. Don't eat meat."
-Kim Basinger

"When I was old enough to realize all meat was killed, I saw it as an irrational way of using our power, to take a weaker thing and mutilate it. It was like the way bullies would take control of younger kids in the schoolyard." -River Phoenix

"I’ve always felt that animals are the purest spirits in the world. They don’t fake or hide their feelings, and they are the most loyal creatures on Earth. And somehow we humans think we’re smarter—what a joke."
--Pink

Humans are the only hunters who kill when not hungry.
--Steven Spielberg

"You ask people why they have deer heads on the wall. They always say, ‘Because it’s such a beautiful animal.’ There you go. I think my mother’s attractive, but I have photographs of her."
--Ellen DeGeneres

Basically we should stop doing those things that are destructive to the environment, other creatures, and ourselves and figure out new ways of existing. --Moby

"We consume the carcasses of creatures of like appetites, passions and organs with our own, and fill the slaughterhouses daily with screams of pain and fear. "
--Robert Louis Stevenson

"As I sat down at the dinner table with my child, I looked at my plate and thought to myself...this too was someone's child." -Jaime Rothman

If any kid ever realized what was involved in factory farming they would never touch meat again. I was so moved by the intelligence, sense of fun and personalities of the animals I worked with on Babe that by the end of the film I was a vegetarian.
--James Cromwell
Publicat de Manu V Pleiadian