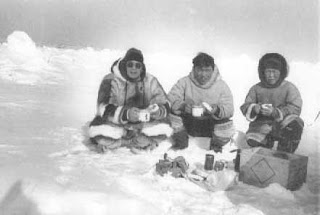 Many are using a false health example standard through the Inuit diet, promoting the myth that meat is healthy to consume.

The below materials are offering some much needed truth and light into this topic.

The vast majority of human populations live in areas where REAL FOOD can be cultivated, preserved and consume ALL YEAR ROUND, with no NEED to KILL in order to LIVE.

While certain compromises needed to be made in Creation in order for some humans to be able to live in extremely harsh climates, for spiritual purposes, as the planet will eventually reverse to her old crystalline based with an all year round tropical climate and through humanity’s spiritual evolution, gradually, all anomalies will get realigned into perfect balance.

http://www.hc-sc.gc.ca/fniah-spnia/index-eng.php
Research has shown that Aboriginal people are more likely to have high blood pressure and type 2 diabetes, which puts First Nations, Inuit and Métis people at an even greater risk of heart disease and stroke than the general population.
Heart disease and stroke are two of the three leading causes of death in Canada, so it’s important to understand how to prevent them. The Foundation has culturally adapted some resources to help you understand the risk factors and warning signs for heart disease and stroke.
http://www.heartandstroke.com/site/c.ikIQLcMWJtE/b.3479041/k.FFD0/First_Nations_Inuit__M233tis_Resources.htm

the life expectancy of Inuit residents would have been 64.2 years, or 15 years less than for Canada as a whole.
http://www.statcan.gc.ca/daily-quotidien/080123/dq080123d-eng.htm

Is the Inuit Diet Healthy? Really? Prove It.

For more Paleo Diet hacks: Is the Inuit Diet Healthy? Really? Prove It. -
http://paleohacks.com/questions/6166/is-the-inuit-diet-healthy-really-prove-it#axzz22aTzOtEI
OK, I got into a debate with a co-worker and it seems that we have very different opinions on the Inuit diet and its effect on their health. Her husband is an ER doc who has spent some time in Alaska. He noticed a lot of Inuit with cardriovascular disease(CVD). According to them, the Inuit diet is linked to an increased incidence of CVD, stroke, and a shorter lifespan (comment through Facebook)