Truth about Weston A. Price Foundation 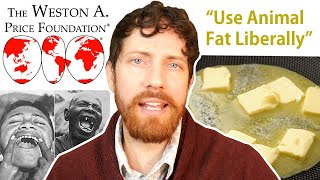 As John Hopkins anthropologist, Dr. A. Walker discovered, circa 1979, via human teeth striation research, Man developed as an 'exclusive' fruit-eater for thousands of years. See his May 1979, 'bombshell' of a NY Times piece, in which he concludes, '...our early human ancestors were not predominantly meat eaters or even eaters of seeds, shoots, leaves or grasses. Nor were they omnivorous. Instead, they appear to have subsisted chiefly on a diet of fruit...'

A simple, cleansing, diet, suited to both his internal physiology - i.e. length of digestive tract designed for plant-foods, affinity for alkaline foods, need for fiber of plant-fare, etc - and his obvious, 'external,' physical traits. Like, his bipedal nature. Lack of snout. No 'loads' of sharp teeth; hands, made for grabbing, holding, the fruit of tree - not claws, for tearing of flesh...

Such a diet served him well, health-wise, for generations. He lived, when juxtaposed against today's, more 'advanced version' of self, in relative harmony with his surroundings; at comparative peace, with his own nature. This - a MASSIVE chasm between his current level of health, and that of his more 'primitive' ancestors - has been well-noted by such researchers as J. Robbins ('Health at 100: The Scientifically Proven Secrets of The World's Healthiest And Longest-Lived People), Australian Dr. Abramowski, Prof. A. Ehret, Dr. Day, M.D...just to name a few.

Humans eat meat! It's been that way forever!' claims, 'genius.' My response:

'Has been that way forever?' Actually wrong. 'Dead wrong.' Humans have been consuming meat for a TINY sliver of our time, here on earth. See, the work of Dr. Alan Walker, anthropologist, Johns Hopkins University. Walker, by studying the teeth markings - or, 'striations' - on humanoid fossils, has proven, UNQUESTIONABLY, that our early ancestors, as he chose to term it, 'were not predominantly meat eaters, or even eaters of seeds, shoots, leaves, or grasses. NOR WERE THEY OMNIVOROUS. Instead, they appear to have subsisted chiefly on a diet of fruit...'

He reveals all, in his May 15, 1979, NY Times piece, on the subject. He continues: 'NO EXCEPTIONS HAVE BEEN FOUND. Every tooth of the hominids of the 12 million year period leading up to Homo Erectus appeared to be that of a fruit eater.' And this would stand to reason. As there are over 30 DISTINCT KEY DIFFERENCES separating the physiology of a natural carnivore, and a natural plant-eater.

The China Study culminated a 20-year partnership of Cornell University, Oxford University, and the Chinese Academy of Preventive Medicine. The survey of diseases and lifestyle factors in rural China and Taiwan is widely thought to be the most comprehensive study on nutrition and related diseases to date. The project produced over 8,000 statistically significant associations between diet and disease. The findings indicated that the consumers of the most animal-based foods suffered the most chronic diseases while those with the most plant based diets avoided these diseases and were the healthiest. Chronic diseases included heart disease, diabetes and cancer. Also studied were the effects of diet in reducing or reversing the risks of chronic disease. The study also examines the source of nutritional confusion produced by powerful lobbies, government entities and irresponsible scientists. [25] According to Dr. T. Colin Campbell of Cornell, "we're basically a vegetarian species, should be eating a wide variety of plant foods and minimizing animal foods." [26], [27]

On the question of osteoporosis, Dr. Campbell replied: "The Chinese study found an average daily calcium intake of 544 mg. (almost none from animal products) and there was basically no osteoporosis in China." In the US there is an average calcium intake of 1,143 mg per day (mostly from dairy) and osteoporosis is a major health issue. Calves have fours stomachs and double their body weight in 47 days as opposed to the 180 days it takes for a human baby to double it's weight

The focus of published reports on dairy consumption are infections, colic, intestinal bleeding, anemia, allergies and more serious issues of diabetes and viral infections of bovine leukemia, an AIDS like virus. Common childrens issues include ear infections, tonsil infections, bed wetting and asthma. Adult issues include heart disease, arthritis, respiratory distress, osteoporosis, leukemia, lymphoma and cancer. Overall health issues include milk contamination by pus cells and chemicals such as pesticides. [29] Most cows' milk contains toxins such as herbicides, pesticides and dioxins and up to 52 powerful antibiotics; blood, pus, feces, bacteria and viruses. Both organic and non-organic milk contain fat, cholesteral and various allergens as well as 59 active hormones. This includes the powerful Growth Factor One (IGF-1) which has been identified in the rapid growth cancer. [30] It has been positively documented and affirmed that dairy consumption leads to clogged arteries, heart attacks and strokes and exposure to contaminants. [31], [32] Research has demonstrated a calcium wash or a loss of calcium and other critical minerals like potassium, magnesium and iron from the blood stream as a direct result of dairy consumption starting at 24 ounces per day. [33] Low animal protein diets create a positive calcium balance, whereas high animal protein diets create a negative balance resulting in bone density loss. While many have turned to low fat dairy products, these products contain higher concentrations of protein. Low fat and particularly non-fat dairy products have actually been shown to increase osteoporosis, kidney problems and some cancers. [34]

The main sources of support are the dues and contributions of its members. The Foundation accepts sponsorships, exhibitors and advertising from small companies by invitation, whose products are in line with WAPF principles.[39], [40] Sponsors include grass-fed meat, wild fish producers