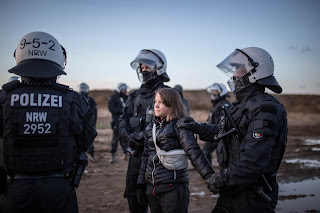 Since Greta Thunberg's apparent staged arrest in Germany's anti coal mining protest, the meat and dairy loving digital pseudo warriors and truthers wannabe couldn't wait to JUMP in and save the day...

Truth is very important to be told on all levels

It's TRUE that the parasitical elite are USING the REAL planetary ecocide WE and THEM have been CO created through the ANIMAL BASED FOODS system, over many decades by launching the climate change controversy to further their agendas

YET, despite a poor innocent soul like GRETA who CHANCES ARE she might've been a MANIPULATED YOUNG GIRL, being taken ADVANTAGE of for her GENUINE PASSION to HELP this planet and USED as a puppet WITHOUT HER BEING AWARE of it YET...

But make no mistake, 8 BILLION HUMANS and GROWING, eating the way we are at the current rate of exploiting, raising, killing and eating TENS OF BILLIONS of SENTIENT beings EACH SINGLE YEAR, CANNOT possibly be good for the planetary eco systems, NO MATTER HOW YOU would justify and lie to yourself that animal foods cannot harm our planet

Think MASS DEFORESTATION, WATER POISONING from this global ecological destruction of using MOST of the land mass for raising other beings as food...

Mass extinction of hundreds of other species

There is NO such thing as SUSTAINABLE animal foods anymore

IN THE US, 4,000+ of SMALL, FAMILY OWNED ANIMAL FARMS have BURNT the GREEN GRASS as the aerial pictures show...and poisoned the water

This goes BEYOND the climate change agenda

It ties in with the LUNGS of EARTH, aka AMAZON being wiped out at mind numbing speed, eco activists killed in the area for opposing the AMAZON deforestation, BRAZIL's ex president selling out to corporations coming in BRAZIL for YEARS and wiping out millions of acres of rain forest to MAKE ROOM FOR CATTLE GRAZING

ALL THIS cannot be good, right?

So, ever since humans have started to wake up to the parasitical elite's MANY agendas, the CLIMATE one, being taken out of its real context, was the most fierce fought against by HUMANS...

Against BETTER ing of this planet, even if it came to our attention as one agenda or another, WE need to start questioning HOW OUR LIFESTYLES are REALLY affecting the ecosystems of our host planet, without the controllers’ agendas...

Never in our known history has humanity denied ANY other agenda as passionately: INCOME TAX, TENS of other taxes, WARS agendas, food poisoning agendas, medical agendas, education dumbing down and political puppets agendas

To this day, MEAT, DAIRY AND TRUMP lovers and defenders are also pointing fingers at POOR GRETA THUNBERG who is an equal victim OF THE PARASITICAL CONTROLLERS...

JUST as WE ALL ARE

one way or another

IF SHE is UNknowingly representing the <elite>

Guess WHAT ARE WE doing?

By foolishly believing and insisting that RIGHT wing is better than left of the same bird when it is a basic fact to recognize how BOTH sides of the same coin are created and manipulated by THE SAME CONTROLLERS disguised as various socio political systems and offering humanity ONLY 2 CHOICES...the LESSER of 2 evils...

Mass media following, compulsive CONSUMERISM, major sports games arenas,  robotic, mindless existence on what is around us and how our foods affect our planet, countless billions of beings lives and deaths as well as our own health

ABOVE AND BEYOND Climate Change agenda...

NO activist has been more attacked than this young girl DOING the right thing IN HER SOUL BUT having had fallen an equal victim to the SAME system, another 8 billion humans have also been fallen and trapped into

Through our VERY daily lifestyles

So, here is why CO2 or not, SUSTAINABLE AND HUMANE ANIMAL FARMING are an oxymoron, a fallacy and an impossibility...

Stop looking for escape <goats> to JUSTIFY AND CONTINUE with our mindless, selfish, apathetic, self-destructive lifestyles.

close to 8 billion of GRETAS helping out